The U.S. Food and Drug Administration made a historic announcement on August 30, 2017 making the first gene therapy available in the United States. The FDA approved Kymriah (tisagenlecleucel) for certain pediatric and young adult patients with a form of acute lymphoblastic leukemia.

Scientists refer to Kymriah as a “living drug” because it involves
using genetically modified immune cells from patients to attack their
cancer. “We’re entering a new frontier in medical innovation with the
ability to reprogram a patient’s own cells to attack a deadly cancer,”
FDA Commissioner Scott Gottlieb said in a written statement.

The treatment involves removing immune system cells known as T cells
from each patient and genetically modifying the cells in the laboratory
to attack and kill leukemia cells. The genetically modified cells are
then infused back into patients. It’s also known as CAR-T cell therapy.

The treatment, which is also called CTL019, produced remission within
three months in 83 percent of 63 pediatric and young adult patients.
The patients had failed to respond to standard treatments or had
suffered relapses.

Watch the news coverage in CNN video. Read the full press release by the U.S. Food and Drug Administration here. 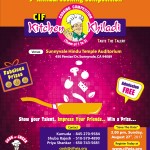 This year’s competition was conducted in partnership with Bharati Tamil Sangam. We want to thank our primary sponsor Shastha Foods and other sponsors Sangeetha restaurant, Embed UR, Madras Groceries and Tirupathi Bhimas.

35 teams competed in the preliminary round and presented different interesting recipes with Little Millet & Zucchini as the main ingredients.
Based on the judges score and the audience score top 8 teams were selected for the finals.

Finals round, live cookout competition, was held before live audience. Contestants used Brussel Sprout and Oranges as the main ingredient for the main entree and dessert.

The focus of the competition is to promote healthy diet and healthy living. This year’s competition was focused on promoting the benefits of millets. Here are the recipes from the final round. Feel free to try them and enjoy them at home!

Here is the list of top 8 finalists from the preliminary round in no particular order. Top 7 teams were selected by the judges and the 8th team was selected by audience voting.

Cancer Institute Foundation is IRS recognized charity under 501(c)3. Your donations are fully tax deductible. Tax ID: 20-1140049. CIF ensures that 100% of your donation goes to the cancer treatment of the underprivileged.

Click on the button below to donate using
major credit cards, debit cards and PayPal.

If you prefer to donate by check please download this donation form, fill it out, write a check to "Cancer Institute Foundation" and mail them to
7625 West Hill Lane, Cupertino, CA 95014.